​In 1940, a non-profit organization was formed in partnership with the National Park Service in Sequoia National Park. The Sequoia Natural History Association (SNHA) was created to assist the National Park Service in supporting educational endeavors. Back then, the organization had a couple of employees and sold $530 in books. In 2015, SNHA operated nine visitor center bookstores, Crystal Cave, the Sequoia Field Institute, and much more. SNHA also purchased supplies for interpretative park rangers, funded research projects, and published the official park newspaper. Over 60 employees dedicated themselves to enhancing the experience in Sequoia and Kings Canyon National Parks and surrounding communities. In the past decade, SNHA has given 14 million dollars of aid to support education, research and natural and cultural preservation to our national parks.

​Since 1986, the Sequoia Parks Foundation was instrumental in funding park improvements, bringing more than a million dollars support in the past 6 years for front country trail improvements with a focus on universal access trails at Panoramic Point and Zumwalt Meadow; wetland restoration at Halstead Meadow, a key supporter for the Rangers in the Classroom education program serving over 70,000 local central valley children, and has provided over $65,000 for the Search and Rescue efforts. 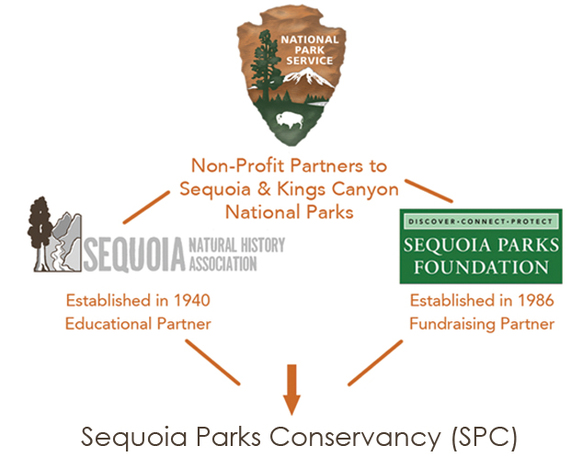 Sequoia Natural History Association and Sequoia Parks Foundation have combined forces to become a unified non-profit group. For decades, both groups have shared the common goal of preserving and enhancing the visitor experience in Sequoia and Kings Canyon National Parks through funding, education, restoration, protection, and visitor services. After much consideration, planning, and encouragement from our partner, the National Park Service, it has been determined that this combined organization
is the best and most effective way to serve the parks, partners, visitors, and community by:
Better serving Sequoia & Kings Canyon National Parks.
Creating a larger and stronger base of supporters.
Expanding reach and capabilities.
Increasing effectiveness.
Improving long-term sustainability.
Fulfilling our responsibility to support the parks.